Another Chance at Life: Cardiac Arrest Survivor is Thankful for the Team Who Brought Him Back 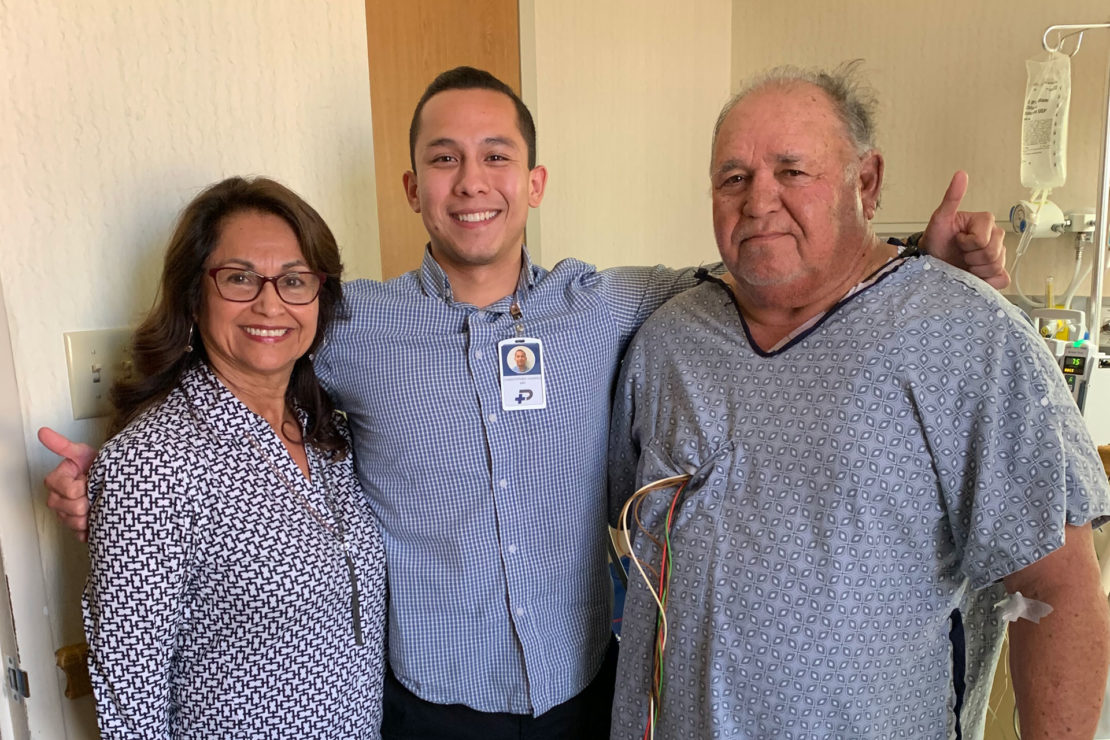 “A series of very fortunate events” is how EMS Program Director Arnold Thomas of Pro Safety & Rescue described what took place at Mechanics Bank Arena on Saturday, January 18th. Richard Martinez was visiting from out of town for a funeral, ironically, and didn’t want to stay cooped up in his hotel room. But when he decided to go to the Condors hockey game that night, he had no idea the decision would probably save his life.

Richard and his wife Corinne showed up to the game. She went inside, but he realized he needed to make a quick trip to the car. It might have been the last time the couple of forty-five years ever saw each other.

On the way back from the car Richard experienced a strange feeling. Something wasn’t right in his chest. He was suddenly feeling bad, nauseous even, and he went to lean against a wall near a parking attendant who offered him a chair.

“You don’t look so good,” she confirmed and radioed for help.

Soon, the on-site EMS were outside. The EMTs on duty that night were Chris Ramirez, Thomas Smith, Megan Vanducci, and Christopher King of Pro Safety & Rescue. The team started to talk with Richard, but less than a minute into the conversation he looked at lead EMT Chris Ramirez and said, “Something’s not right,” then lost consciousness.

They checked his pulse and found that he was in full cardiac arrest! Immediately they started CPR, cut off his shirt to attach the AED, and called local EMS agencies. The AED instructed not to touch the patient because a shock was advised. After the shock was delivered the team continued CPR.

It is very rare for a person who goes into cardiac arrest to ever wake up again, but after about a minute of CPR, Richard came to! He was alert and started to talk to the team and answer their questions. As they continued their assessment, Richard started to get fuzzy again; he was fading. The AED delivered another shock and he woke up a second time! By then, the ambulance and fire department were on the scene and the team handed Richard over to the ambulance crew who took him to Adventist Health Bakersfield.

It was indeed a series of very fortunate events that night.

“They were so attentive and they were working together so closely as a team,” said Richard’s wife Corinne Martinez about Pro Safety & Rescue’s EMTs. “It was difficult to see my husband like that, but they brought him back.”

Had Richard passed out moments earlier while he was at his car, it likely would have been too late before anyone noticed him. As it was, the extra moments he was alert and able to get into the company of the parking attendant saved his life. Another happy coincidence was that there happened to be two events going on at the Mechanics Bank Arena that night and so, for a thirty minute window, there were two teams of EMTs on site. Having the extra hands helped the Pro Safety and Rescue team to begin CPR, initiate the AED process, and contact the local EMS agencies with the utmost speed.

In the following days, members of Pro Safety & Rescue’s EMS team met with Richard and Corinne Martinez. There were hugs and the sense of gratitude for life in the room was palpable. Corinne explained that she and Richard had been married for forty-five years, and thanks to the EMTs on duty, they could continue their life together for more years to come. The couple was thankful for the little things that many of us take for granted, one of which was the chance to watch the 49ers game together. It was a heartwarming time and only days after the incident, Richard was in good spirits and even standing to get pictures with the EMTs who saved his life.

Cases like Richard’s are very rare, and for the few people who do wake up, recovery is often quite a bit slower. A story like this, such a series of fortunate events, is something to be celebrated. Pro Safety & Rescue’s EMS team take pride in the fact that they did their job well and as a result, Richard Martinez, a beloved husband and grandfather, was given another chance at life.

Ready to work with us? Contact Us Now
What our clients have to say...

Pro Safety & Rescue has traveled all over the state with us. I trust every rescue, EMT, and safety professional on their staff with the safety of my team member. When it comes to PPE, they always deliver.